The Maya were prolific mathematicians, astronomers and architects as well as artisans, travellers and traders. As one of the central cultural figures of Mesoamerica, the Mayan Baths were designed as a tribute to the Mayan people’s prowess and Mayan symbolism is artistically featured throughout the underground. 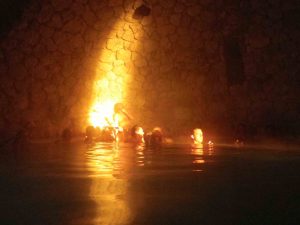 The Baths’ longest water filled passageway is precisely aligned with the winter solstice so that on December 21st of each year, when the sun reaches its southern most position on the horizon, its rays shine straight down the tunnel reflecting off the quartz and crystal rock walls, casting an orange glow 150 feet deep into the back of the cave. This phenomenon of the sun setting down the tunnel lasts for almost 3 weeks on either side of December 21st coinciding with the winter high season holiday periods.

The winter solstice was of great significance to the Maya as it was to all ancient cultures. If the god of the sun, for whatever reason, decided to continue his journey of setting further south on the horizon each day and not return on his path to the north, it would mean utter disaster for them. Days would become even shorter and colder and dryer as they had been since June. At our latitude the setting sun makes an arc of almost 60 degrees on the horizon between the summer solstice, June 21st and the winter solstice, December 21st. The Mayan prophecy of 2012 tells that on December 21st of that year we would expect significant change when the 400 year calendar cycle of the 13th Baktun ended, on 13.0.0.0.0. The Winter Solstice Story is told on the following page. 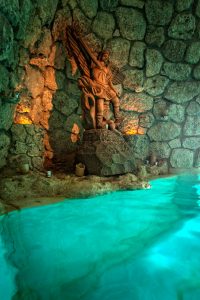 There are 13 candles perched along the main water tunnel walls signifying the 13 moons in the calendar year and the number 13 which was a sacred number to the Maya. It also represented the 13 steps to the heavens and the local pyramid at the Cañada de la Virgen has a building at “Complex A” with 13 steps called (Casa de los 13 cielos) house of 13 steps to heaven. The building was conceived as a moon clock and governed hunting and planting as the ancients religion in this area was devoted to the worship of the Moon. 13 is also the number of periods (months) in the Mayan Short Count Calendar, (known as the Tzolk’in, 13 times 20 equals 260 days and the number of the Baktun that ended on December 21st 2012. The Mayan counting period (the equivalent of our month) had 20 days and the first seating nicho in the water tunnel has 20 candles which represent each of these periods/months. One theory for the 260 day calendar is that it came from mathematical operations based on the numbers thirteen and twenty, which were significant numbers to the Maya. Another theory is that the 260-day period came from the length of human pregnancy and 260 is close to the average number of days between the first missed menstrual period and birth. Yet another theory comes from understanding of astronomy, geography and paleontology. At a latitude of about 15° N (the latitude at the center of the Maya civilization) the Sun passes through zenith (90 degrees overhead) twice a year, and there are 260 days between zenithal passages. It was also thought that this calendar may have been based on the time needed from planting to harvest of crops which is approximately 260 days.
The Maya well knew that the solar year had 365 and a fraction days and they had another count for this calendar. The Mayan Long Count calendar, known as the Haab, had 18 months of 20 days or 360 days plus the 5 nameless days. The second seating nicho in the water tunnel has 18 candles representing the days in this calendar. 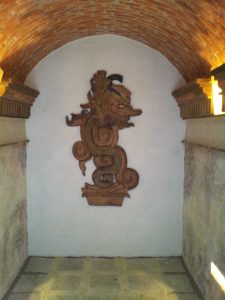 The third nicho in the tunnel represents the Wayeb’, the five nameless days at the end of the calendar, which was thought to be a dangerous time. Foster (2002) writes “During Wayeb, portals between the mortal realm and the underworld dissolved. No boundaries prevented the ill-intending deities from causing disasters. To ward off these evil spirits, the Maya had customs and rituals they practiced during Wayeb’. For example, people avoided leaving their houses or washing or combing their hair.” Surrounding the statue of San Miguel (Saint Michael) in this nicho are the remaining 5 candles completing the 365 day solar canendar.

The feathered Mayan Vision Serpent, Kukulkan, messenger between their king and gods, is found at the end of one of the passageways rising as a plume of smoke from a simmering caldron.

Fashioned of colored pebbles, the Mayan “Tree of Life” adorns the floor of our “Topo Loco” bar. Mayan glyphs carved in cantera stone border the doors and mirrors in the bath/dressing room, and the sink spigots are in the form of jaguar heads, the animal that protected shamans from evil spirits.

A replicated Mesoamerican Temazcal (house of steam), the traditional Mayan sweat lodge, is under construction just below the main pool. Used in ritualistic ceremonies of detoxification, healing and relaxation it is also a spiritual journey of rejuvenation, purification and a reconnection with mother earth.

Frescos along the walking tunnels are of Mayan hieroglyphs.

A pyramid in the sitting room beside the entrance to the water acts as a heater and is also aligned precisely on the winter solstice. This pyramid along with the rest of the baths has received the blessing of the Mayan Shaman, Ak-Tah. 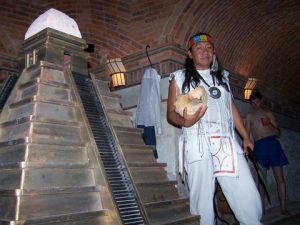 Although not generally known to be from this area, it is known that the Maya traded with the Anasazi of Northern Mexico through artifacts discovered there. And Anasazi artifacts were found at the pyramid at the Canyon of the Virgins here in San Miguel. A recently discovered ancient village just north of here at the headlands of the Laja River, which flows directly in front of our property, and the pyramid at the Canyon of the Virgins are both of an architectonic type and style of early Mayan design.